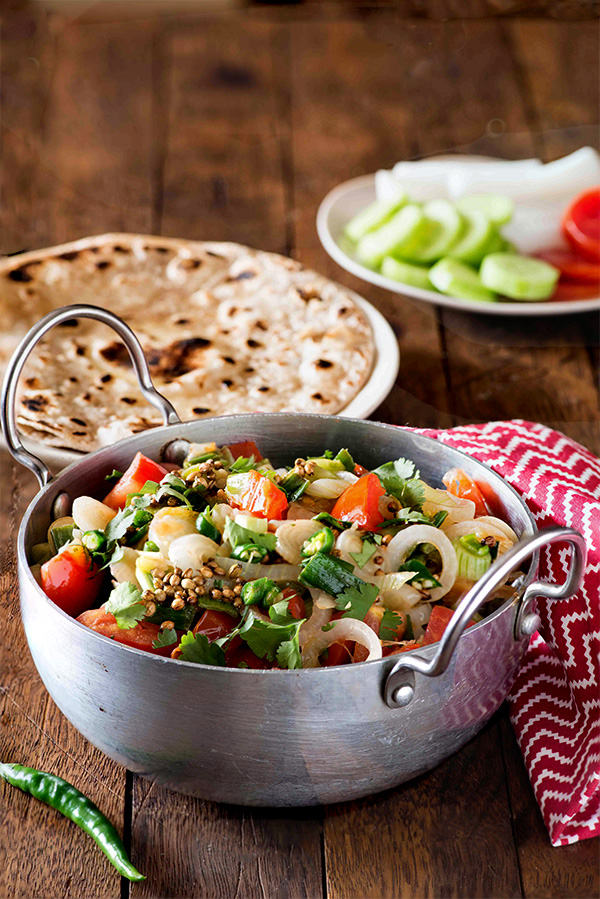 Pyaz tamatar sabzi or onion tomato sabzi, for me it symbolizes the food memories, the grandmother cooking with the fresh seasonal produce in winters and fresh tasting stir fry in Parantha rolls that we used to eat when we visited Grandma's home.

During the winter vacation for 15 days  it was time to travel to the village, and enjoy lots of winter delights. This spicy pyaz tamatar sabzi and many other delicacies like Pinni, gajar ka halwa, methi ka paratha with white butter and lassi, Sarson ka saag with tandoori Makki Ki roti for lunch and hare choliye Ki chutney with khichadi for dinner, were a norm in winters. We never mentioned them and highlighted them as seasonal delights because that's how people ate their meals in those days, so it was norm.

Following a seasonal diet and using seasonal ingredient was the only way people knew, unlike these days when everything is available during all the year around. 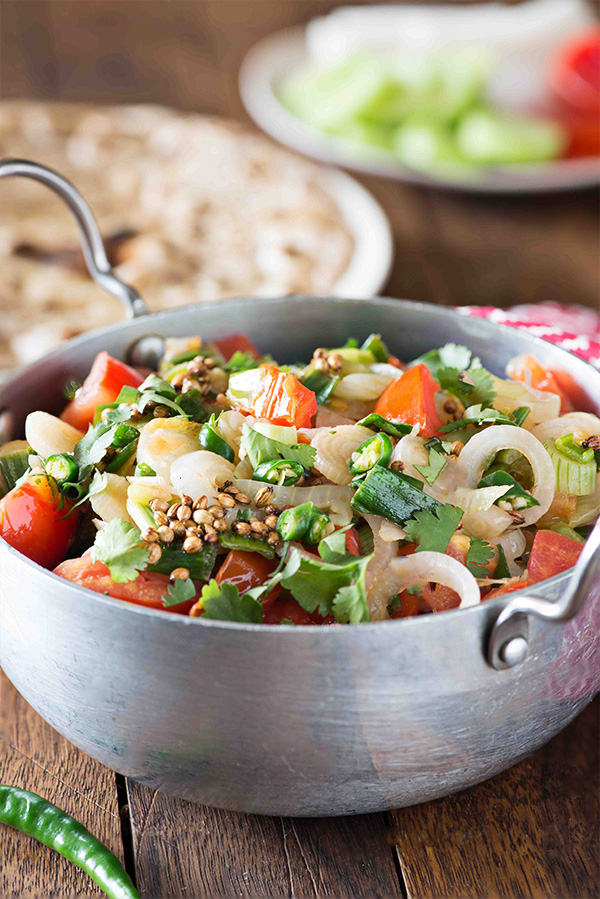 I still like to follow seasonal eating patterns as far as possible in our day to day food at home. Based in North India winter is a favorite time as we get so many fresh vegetable varieties during the winters. It is also fascinating to see how in different states the same simple dish gets different flavours and textures delight the taste buds.

Pyaz tamatar Ki sabzi as we know this simple spring onion and winter tomatoes is a flavourful side dish that adds a spicy and tangy kick to a simple Dal roti meal or matar gajar pulao that's another winter special. I remember this was eaten with so much if relish even for the breakfast with stuffed paratha's in next morning. Even though there were no refrigerators in the villages in those days this kept well even till lunch time next day. Winter low temperatures were real at that time unlike these days in the north where all we get is just a semblance of winters for few days. 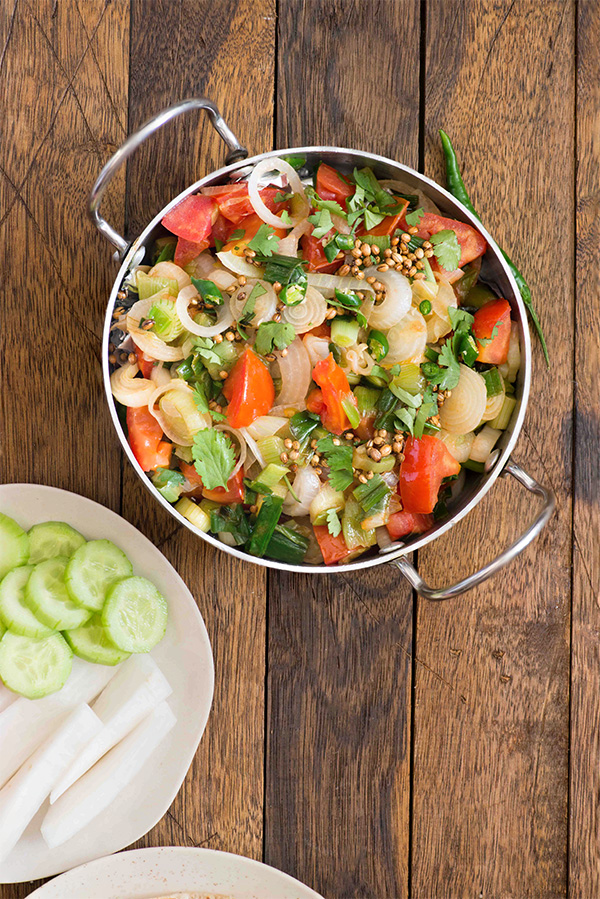 Coming back to pyaz tamatar sabzi, in Punjabi homes we like to give it a different tadka(tempering). Even the texture is quite different from Rajasthani pyaz and tamatar sabzi with is mushy in texture and regular pink onion is used along with dried red chilli. Punjabi/Multani style Pyaz tamatar sabzi that my Nani and mother cook still retain the crunchy texture, because they cook it on high heat. When veggies start wilting, a small amount of whole coriander tadka is added to it which adds an interesting dimension to taste and texture of the food.

It's so fascinating to see the tastes change as we transition to neighboring states. My grandmother's cooking style was influenced by both Multani and Punjabi cooking in pre-partition era as they belonged from the area where both cultures merged and food traditions combined. Same with my mother who primarily cooks dishes from both the regions. 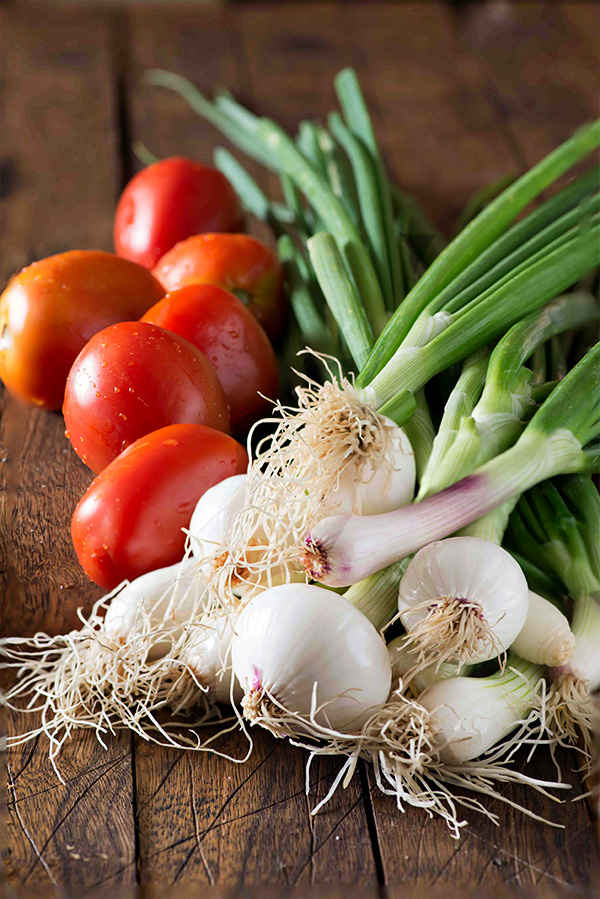 I can really go on and on and on my food nostalgia of seasonal winter food and dishes, but let me first talk about this simple pyaz tamatar sabzi. It tastes best when cooked in ghee, I add both parts of spring onions, greens as well as white. It's preferable to make the pyaz tamatar sabzi with young and tender spring onion with a small bulbous part which is less pungent and sweeter . A good amount of green chillis and preferably desi tomatoes. 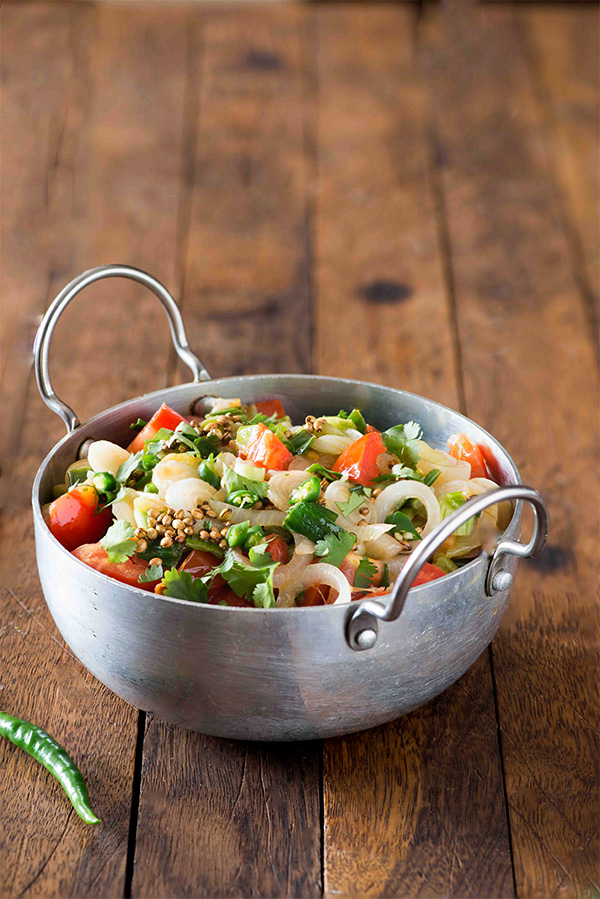 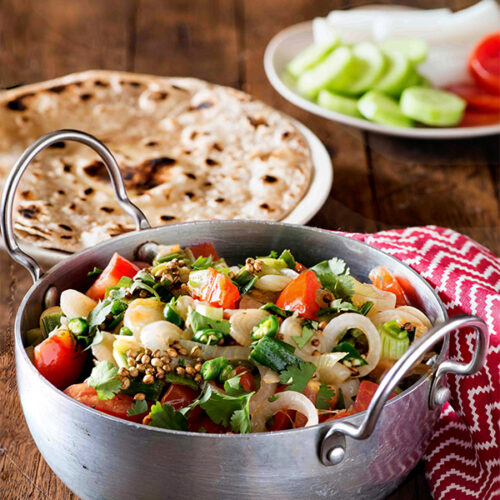 I sliced the spring onions into roundels you can slice them in any ways. Use tender and raw spring onion preferably smaller ones. Use greens of one or two onions not more than that.
« 5 Tips and Techniques for Deep Frying | Frying Tips
Matar ki Malaidar Kheer »
343 shares