Vada Pav is one of the famous Mumbai street food and most favourite roadside snack. Vada pav recipe, own desi Indian burger is a sandwich in which spicy batata vada with chilli garlic chutney is sandwiched in the famous Mumbai pav. The taste of Vada pav actually depends on how good is Batata vada or Aloo vada, also the vada pav chutney. 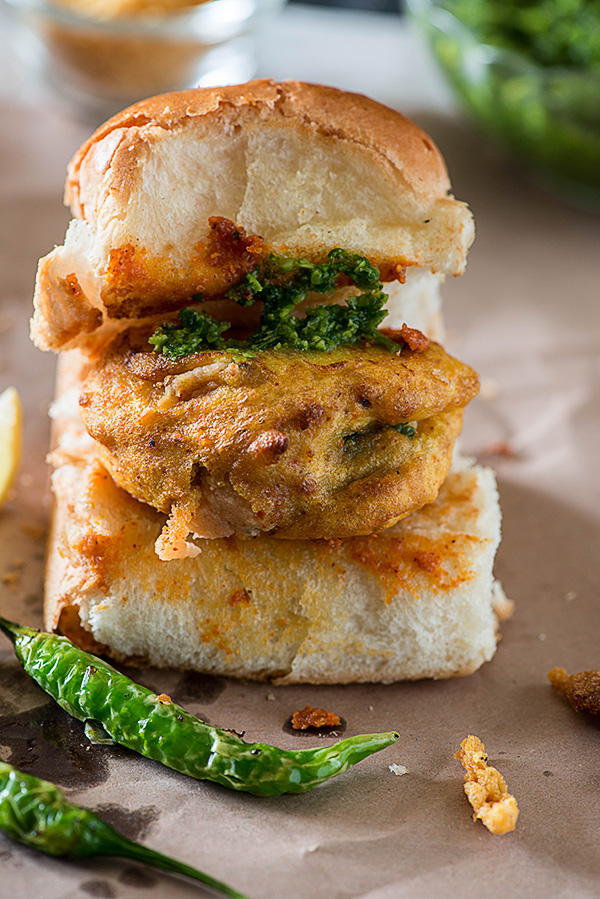 Batata vada is made with spiced mashed potatoes, dipped in batter and deep-fried are otherwise popular in Mumbai and southern Karnataka where it is known as Aloo bonda/aloo vada.

By now you already know how much I love Mumbai street food. Yes! I love vada pav even more than my own city’s Dahi Vada.  Other than being tasty, most of the Mumbai street food is quite filling which for me works as more often than not I make it one of my meals. For me, snack has to be something that has 200 Cal or below, and most of the street food do not fall under that calorie range. So, I serve them as a meal.

As I said before Mumbai Vada pav is our own desi burger in which batata vada or Aloo bonda or Aloo vada is sandwiched between Mumbai’s iconic and favourite bread ‘Pav’ along with two different chutneys. Spicy chilli garlic chutney with peanut chutney, known as Thecha and green chutney. A fried piece of green chilli is mandatory to enjoy the real taste of authentic Mumbai Vada pav.

You get one of the best Vada pav opposite Mithi Bai College in Mumbai. But, even if you don’t get a chance to sample that, you get a decent Vada pav on any of the stalls near Mumbai local railway stations. Goli Vada pav is another popular vada pav, Now we have their Vada pav franchise in NCR too.

There is no popular Vada for me, so the next best option is to make Vada pav recipe at home.  This is one of those foods you simply can not put it “not tried yet” list, so You must try it soon :).

We do make Mumbai vada pav often on the weekends for brunch. Even though I have almost got my chutney right except I make my Thecha without garlic, but getting the softest Pav buns like Mumbai is almost next to impossible in Delhi. So I have to make do with what is available here in Delhi.

No, I don’t make pav bun at home anymore simply because I hardly get just a weekend off so I would rather spend that on meal prep for the week and be going out /chilling at home with family. So, I buy the bread from my favourite bakery. I admit it is not as good as Mumbai ladi pav. But, till the time I get that type of bread in Delhi for making Vada pav I can live with what’s available. I even make samosa pav with the same pav bread. It's good! 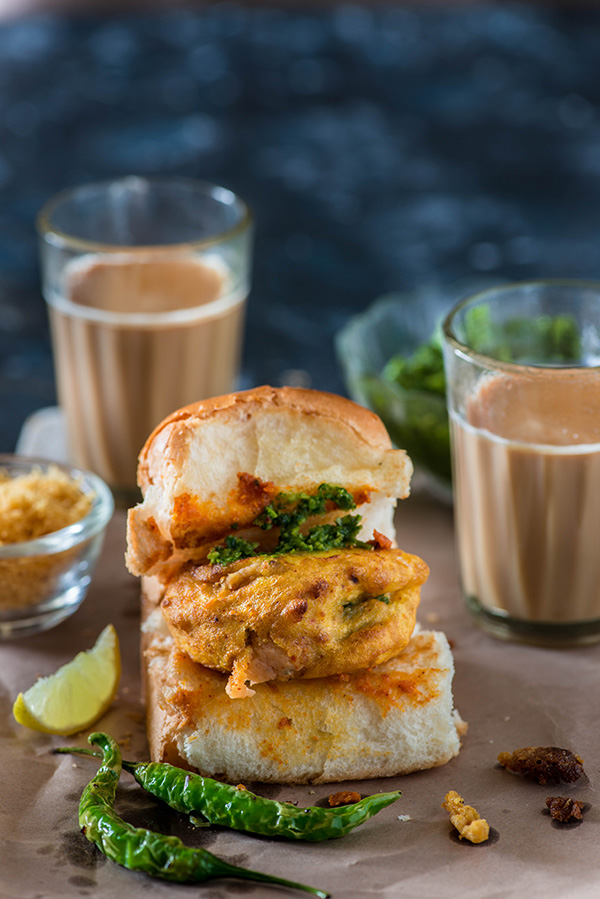 BTW, if you know where can I get pav similar to ladi pav of Mumbai in Delhi, Do let me know where I can get it. You will get a lot of good karma to make a foodie happy 🙂

Also, there is another interesting variation available these days, Chura pav. In chura pav, the chura (crispy drops of gram flour batter) which you get when frying batata vada is used along with vada pav chutney. You can also, add this chura to regular vada pav. Options are as many as you can imagine. 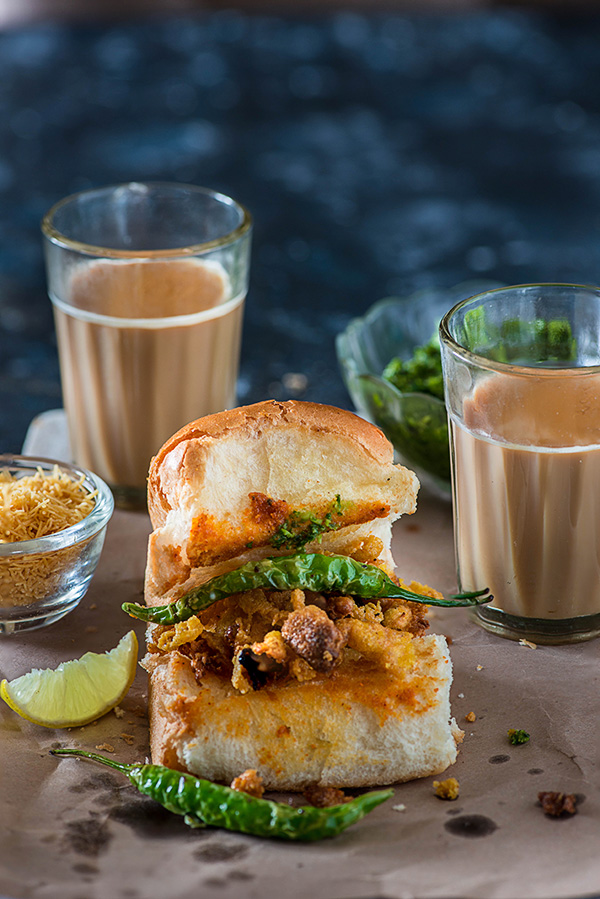 If you are making vada pav recipe at home, first you have to get your batata vada right. I have a batata vada recipe on the blog. You can learn to make batata vada with this Video recipe of Batata vada/aloo vada.

Just grind it all together and use it as required

Just grind them all to gather till you get a coarse paste. 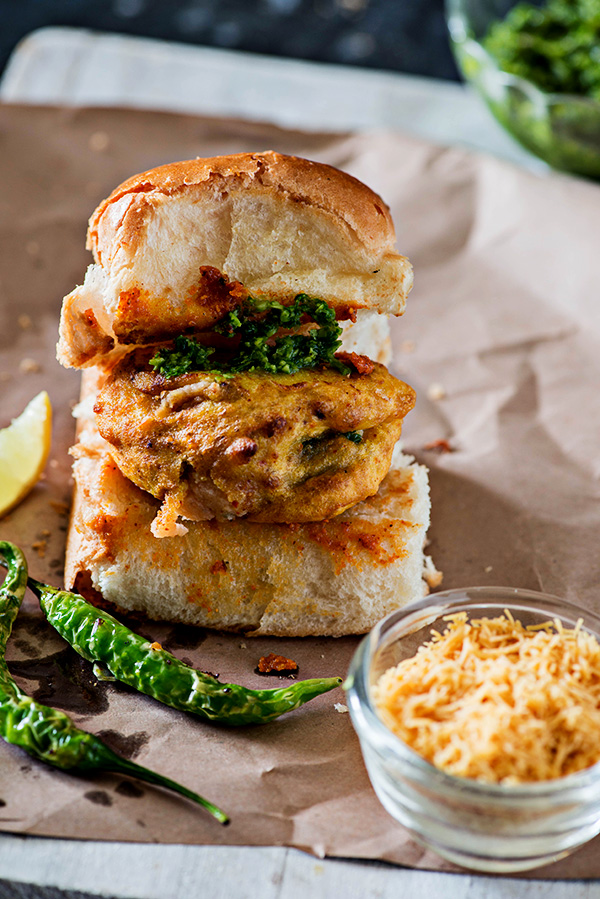 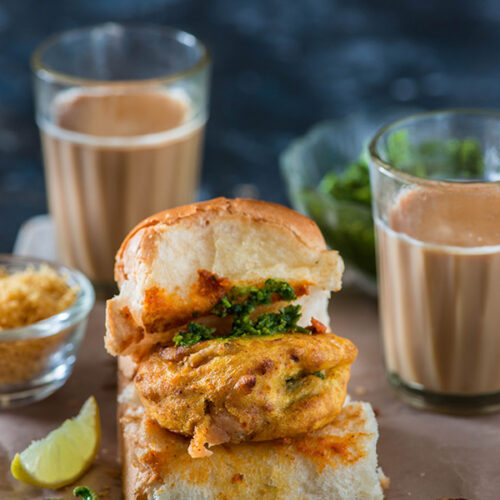 How to Make Batata Vada