Bread pakora recipe. Bread pakora is one of most popular quick bread snack recipe served at tea time or sometimes as a breakfast. We are in love with this famous Indian street food snack recipe. 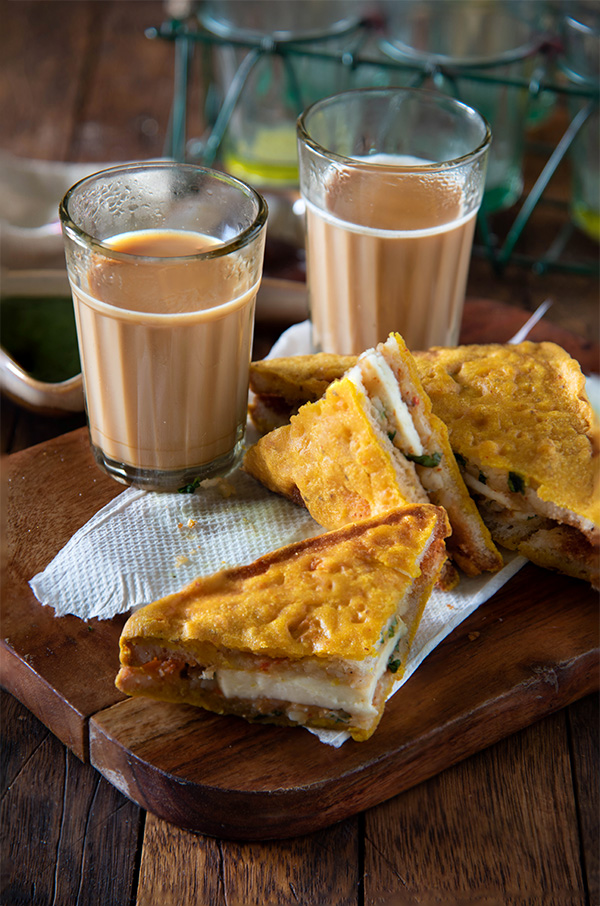 Fried fritters or pakoda become staple snack during the monsoon season. This is officially the season for hot crisp pakoras with chutney with a hot cup of tea.

Pakora is famous Indian street food which is found in Indian street, you can even call it a Indian fast food and eating joints. I make bread pakora in many different ways. There are variety of stuffing recipes to make pakora. ALoo stuffed bread pakora, Aloo and paneer bread pakora, chutney paneer sandwich bread pakora are few of our family favorite recipes.

How to Make Bread Pakora

For making plain bread pakora, I dip bread slice in chickpeas flour batter to coat it and then deep fry this in hot oil to a crispy golden perfection.

You can either make plain or stuffed pakoras. For plain one simply make besan or chickpeas flour batter, dip bread slices and deep fry them. It is as easy as that, very simple!

You can use potato or aloo masala, mixed vegetables, paneer, chicken mince, tofu or any other stuffing of your choice.

These bread pakoras taste so good that you can even serve it as breakfast. If you love potato or aloo, You will have to agree the bread and potato combo is one of the best. You can pack them in kids lunch box or serve as appetiser for any party.

If you love these delicious Indian snacks of pakora, We have 10 Awesome Pakoda Recipes to indulge you this rainy season!

There are the endless combinations you can use as pakora stuffing. In Delhi, there are two popular stuffings; spicy potatoes and paneer sandwich layered with chutneys. Some places in central India also make these with a tomato chutney filling. You can also try some innovative stuffings of your own choice if you wish to.

Just stuff two-three slices of bread with stuffing, dunk them in besan pakora batter and fry.

Make them healthier options like ragi and methi pakoras, ragi and amaranth leave pakoda and instead of deep frying I make Air fryer pakora.

This is recipe just like bread pakora of your college canteen. Pakora, samosa, cups of sweet tea and never-ending chit chat with the best friends. Oh God! How I miss that beautiful time.

I have tried to make some delicious changes in the stuffing. In our home, we totally love plain bread pakora too. Just skip the stuffing step, and dip the bread in pakora batter nicely and fry to make it that way. I am also planning to try bread pakora with egg soon. And Yes! when you are eating pakora you really do not worry about pakora calories 😀 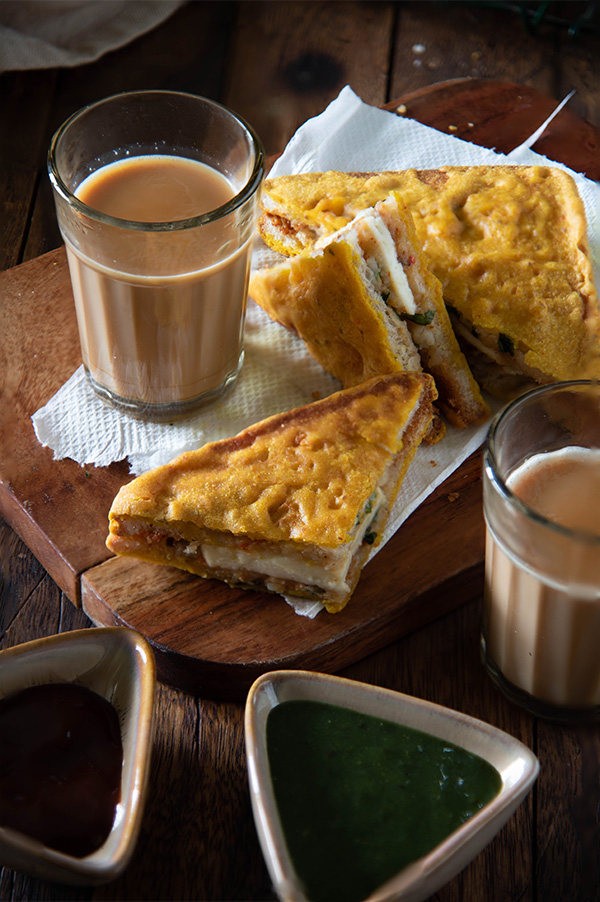 Coming back to these two stuffings.

The first one is regular potato stuffing and paneer slice! If you are not a great fan of potato you can even use sweet potatoes. But we totally love every aloo snack recipes here, so I used that.

What makes it best is, crushed ‘anar dana’ or dried pomegranate, to give it a nice tangy spicy kick. If you are not using anardana you can use lemon juice.

The second bread pakora recipe is a triple layer sandwich pakora. It has tomato sauce for sweetness, green chutney for spicy, mashed potatoes and paneer to make it wholesome and satisfying.

The stuffing is paneer, so I am giving you another option for making this delicious Indian snack. And that is without potato. 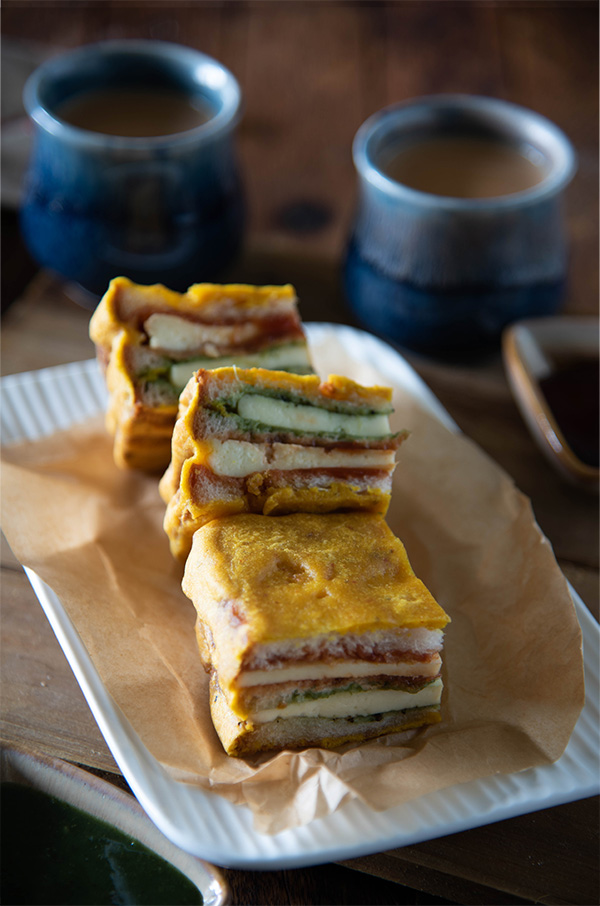 To Make Bread Pakora Without Stuffing

Plain bread pakora without stuffing is one of easiest recipe. Pick white bread, brown bread, or multigrain bread. I have even used sourdough bread for making pakora.

Second step is making batter. For making pakora batter Mix together besan or gram flour with spices like carom seeds, ginger, red chilli powder, salt to taste and mix them. Consistency of pakora batter is most important for this. You do not want to make a very thick or thin batter.  It should be just coating consistency.

After making batter rest it for few minutes and then, cut bread slices into triangles. Simultaneously, heat up the oil and dip the bread slices. Fry these in hot oil till golden brown and crisp!

Drain them out on absorbent paper and serve with chutney of your choice.

After that add coriander powder, salt to taste, red chili powder and anardana. Mix the ingredients well (add as much water needed ) to make a smooth thick dough. 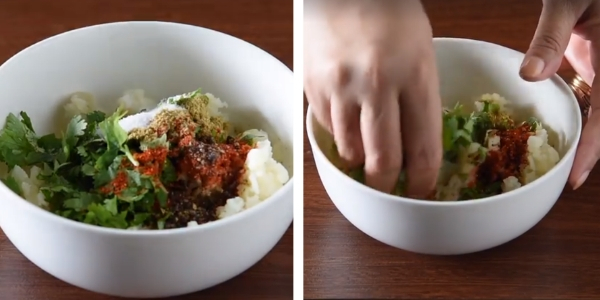 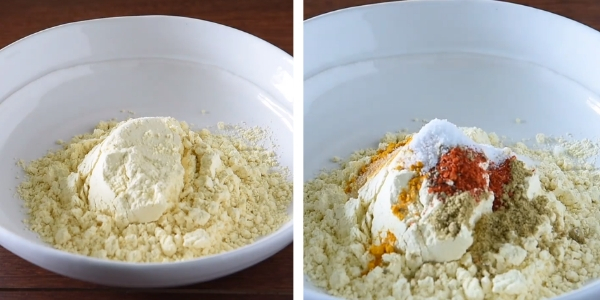 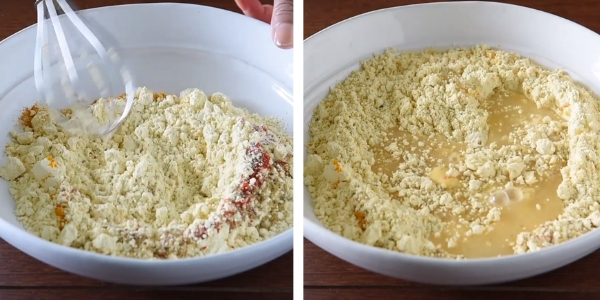 Add water in small batches and make a thick batter. 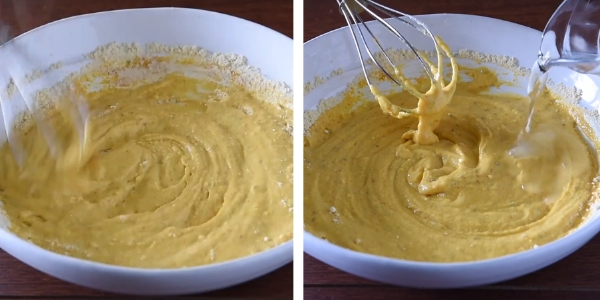 When the batter is of the desired consistency keep it aside. Now, take two bread slices and keep them on a flat surface. 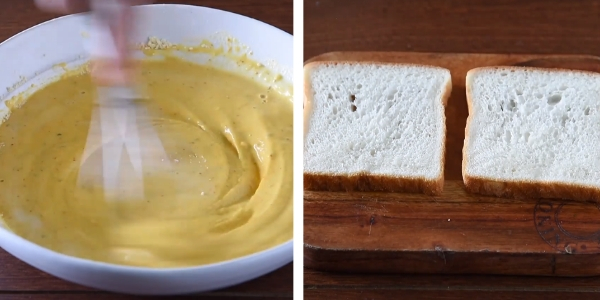 Put the potato stuffing on each slice and spread it well with your hands. On one side add a slice of paneer in it. 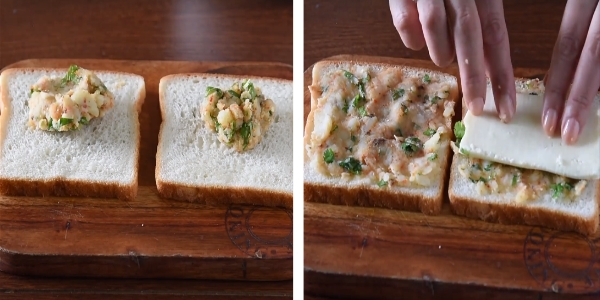 Cover and stack them together as sandwiches and then coat the bread sandwich in the besan batter evenly from all the sides. 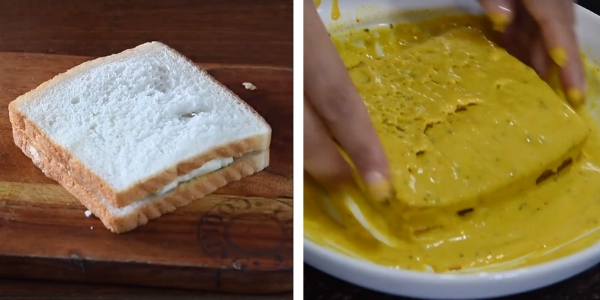 Heat oil in a pan and when it starts to smoke, carefully put the paneer pakora sandwich in it. 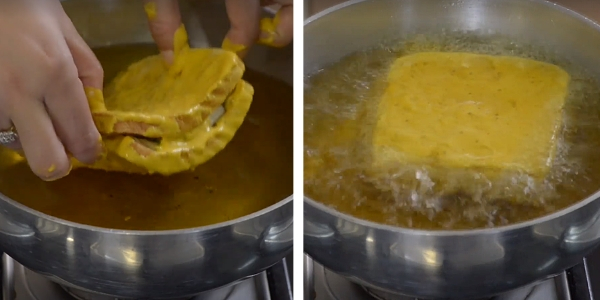 Deep fry the sandwich until they are golden brown. When done, take out the crispy bread pakora, cut them in pieces and serve with ketchup. 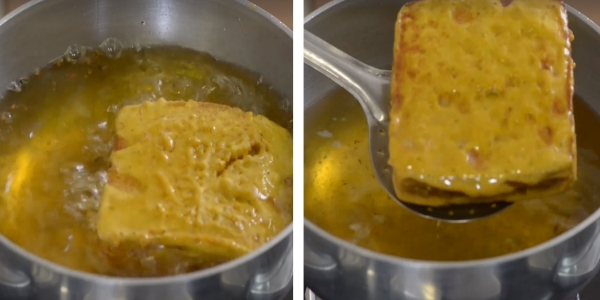 Both these bread pakora recipes are a treat to serve and eat this monsoon season. For parties, serve them as small little bite sizes for a cocktail snack. You can also try making these pakoras with different pakora batters. Masoor Dal flour batter, maize flour batter, rice flour, and maida mixed or buckwheat as per your taste.

You can also make mix pakora with methi/fenugreek and ragi flour, crispy onion pakodas or this Special Paneer Pakora. You can make pakoras with Kuttu ka Aata/ buckwheat flour. If you love fried snacks you may like to try Indian Punjabi samosa.

Enjoy these 2 different types of bread pakora recipes with your favorite pakoda chutney and sauce. They will leave you with a hearty content feeling. Some days it is okay to indulge 🙂  Either way, walk more and exercise more to digest these amazing pakoras. For the besan Batter

2) Another stuffing for Bread Pakora

While frying the pakoras in hot oil, keep pouring a bit of oil on top for even cooking.