Paneer Bhurji is a popular North Indian paneer recipe. Soft fresh paneer is scrambled in a hearty tomato-onion masala with a dash of ginger, This looks more like paneer bhurji gravy.  Just like most of paneer recipes paneer bhurji is one of easy paneer recipe you can make in 20 minutes. Scooping up Amritsari paneer bhurji with crispy paratha and bite of fresh green chilli is sheer bliss! In my few years of living in Punjab as my Husband was posted there that time, we ate a lot of Punjabi dhaba food. Punjabi Rajma masala, Dal Makhani and many paneer dishes. When you are young and very active, you hardly count calories :D.

The paneer bhurji Aka Indian Paneer cheese scramble was and is a very popular choice in a dhaba (roadside restaurant) menu. Since this paneer bhurji recipe is originally from a very popular Amritsari dhaba "Tarachand ki Paneer Bhurji" I managed to ask him his secret ingredient for it. And it was a surprise for me. Regular paneer Bhurji Recipe Here

I recently posted another paneer bhurji gravy recipe you can check that too.  The speciality of Amritsari paneer bhurji is that it is semi-dry as compared to regular dry paneer bhurji. The heat from green chilli and taste of zesty ginger makes it a total delight for tastebuds. Amritsar is not only famous for its golden temple but also its golden legacy of Punjabi food. If you want some lip-smacking spicy food, your preference is unanimously Punjabi cuisine.

Paneer Bhurji is one Paneer recipe you can eat for breakfast, lunch or dinner. Scrambled paneer in any form is now part of most of the street side Indian food. I have eaten scrambled cottage cheese masala with pav bhaji masala served with toast or a pav at Mumbai for breakfast. And then this Punjabi Paneer ki sabji, Paneer bhurji with slight gravy served with paratha or roti. 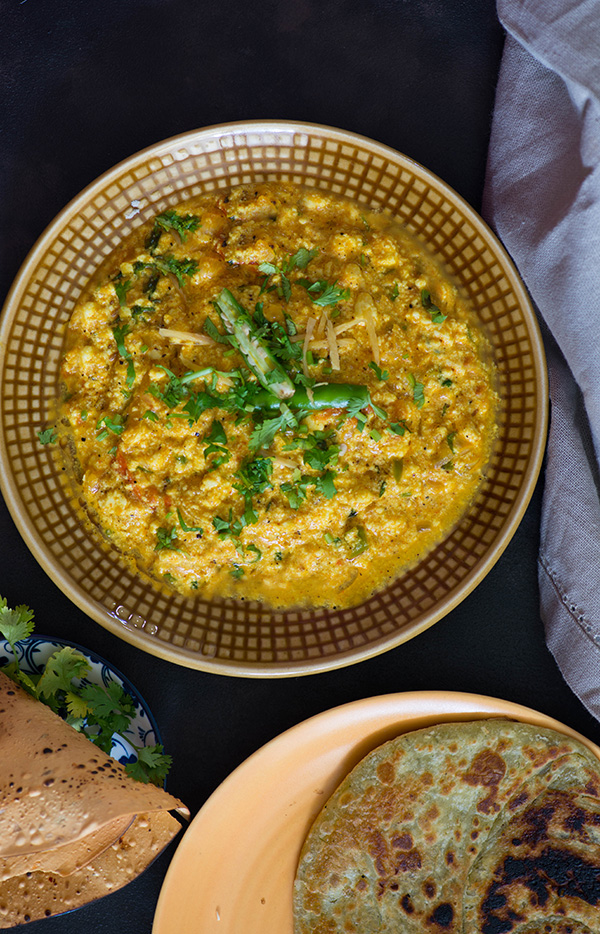 If you go to Punjab a cold glass of lassi will surely accompany your flavourful amritsari thali. Warm chole kulche or paneer paratha with a chilled glass of sweet lassi is like a match made in heaven and a perfect recipe for a long afternoon nap.

If you love Punjabi Food and Paneer recipes that are tweaked to fit into the everyday Indian meal plans (few exceptions).

And if you thought you can only make a Paneer recipe in Punjabi style, you must try this famous Mumbai Tava Paneer or paneer ghee roast with South Indian flavours.

Coming back to this Paneer Bhurji, you can try it wrapped in a roll,  as a calzone filling, or a pav-bhurji combination if you are a fusion food lover.  Either way, this semi-dry curry is wonderful simply with toasted bread even. The best part is- it is a ‘no spill dish’ to carry in your tiffin box.

If you are a vegetarian and do not eat eggs, paneer is a popular choice of food for vegetarian Ketogenic diet. Though paneer is not as a rich source of protein as egg white is, few of well-known protein sources for vegetarians. The total Protein in 100gm Protein is approximately 18 gm and carbs in paneer are 4gm it is much higher in fat though. I would call it more of low carb option if you see it from an Indian diet point.

It has calcium which gives you strong bones and teeth. Amazingly, paneer is also a fat burning agent due to its conjugated linoleic acid content.

Have this amritsari paneer dish with naan or lachcha paratha and cool lassi for an authentic rustic experience.

If you enjoy my food and recipes, Follow me on Instagram for daily food updates. I keep posting my recipes, tips and kitchen hacks on Twitter. watch the full-length videos on my youtube channel and Do take out a minute to rate the recipe and let me know your feedback.

If you like this recipe feel free to share it on Facebook and WhatsApp and leave us your comments below. We love listening to your feedback!

You may want to try