CFC tea, cumin fennel and coriander tea is a simple recipe known for its health benefits. It is a popular detox, weight loss and debloating Ayurvedic drink. In India it is known as cumin water or jeera, dhania saunf water.

CFC is a popular digestive drink that is revitalising and is known for its metabolism-boosting properties. Especially during winters when sluggishness is more prominent and these spices also help to reduce inflammation in the body. CFC tea helps to clear water retention and flushes out the water weight

This is my sure shot remedy for bloating and improving digestion whenever we dine outside.This cumin fennel and coriander tea is a traditional Ayurvedic tea that soothes digestive distress and is good for gentle detoxification. That makes it our favourite healthy drink for winters and the holiday season when there is a lot of eating out and overeating festive meals happening.

You need three ingredients which are easily available whole spices. You can find them in any Super market in the spice section or Asian grocery store.

Instructions - How to Make CFC tea

CFC tea is super easy to make. Here's how to make it.

2. Cover and let it simmer in water for at least 5 minutes, pour and enjoy it warm or hot.

You can make the CCF tea mixture in advance by mixing equal parts of cumin, coriander and fennel seeds. Store it in an airtight jar and use it while making tea.

I prefer to add them individually from their containers while making tea.

How to Consume CFC Tea

I drink one cup of CFC tea decoction every morning. It is refreshing and keeps my digestive power (Agni) potent.

It does not taste like your usual tea. It tastes unusual but good but in case you do not like unsweetened tea add a pinch of cinnamon that adds sweetness or a drizzle of honey also is good.

Health Benefits of Spices in CFC

All of these 3 culinary spices cumin, coriander and fennel helps to relieve bloat, flatulence, acidity, heartburn which are known benefits of this CFC tea called. It is especially beneficial when you consume excessive rich, heavy or oily foods.

The spices combination is a diuretic that is why it gives you relief from water retention. Because of the diuretic nature Do not drink CFC tea in the evening or before bed.

It helps in improving gut health.

As per Ayurveda, this Tea enhances the body’s natural detoxification process, thereby enhancing the metabolic rate and to some extent aids in weight loss. 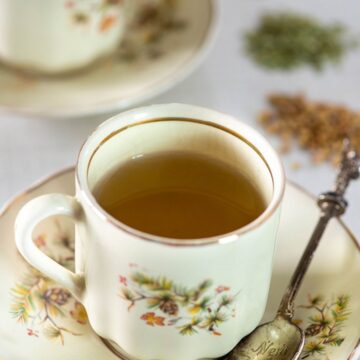 How to Make CFC Tea

You can make the CCF tea mixture in advance by mixing equal parts of cumin, coriander and fennel seeds. Store it in an airtight jar and use it while making tea.
I prefer to add them individually from their containers while making tea.